This Tumblr post by appetitusinvictus takes on the “heat of the moment”-style explanations for police violence, which may be legitimated (I argued in my last post) by IAT training. 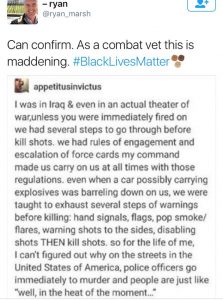 I’m currently trying to figure out if there’s any connection between implicit cognition as a paradigm for thinking about racism, on the one hand, and the (re)emergence of the “implicit” and “instantaneous” within scientific (and moral) discourse about reading on the other.

This update comes in the wake of two more shootings of unarmed African Americans: Terence Crutcher, standing outside his stalled car, and 13-year-old Tyre King.

Here is the Clinton campaign’s response. Observe, once again, the progressivist optimism in “going right at” (and catching, and overcoming?) implicit bias, combined with an anti-rationalist insistence on the “absolutely inexplicable” nature of the killings. 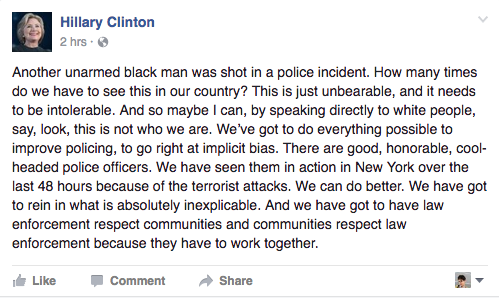